Made and printed by Panini S.p.A – Modena. 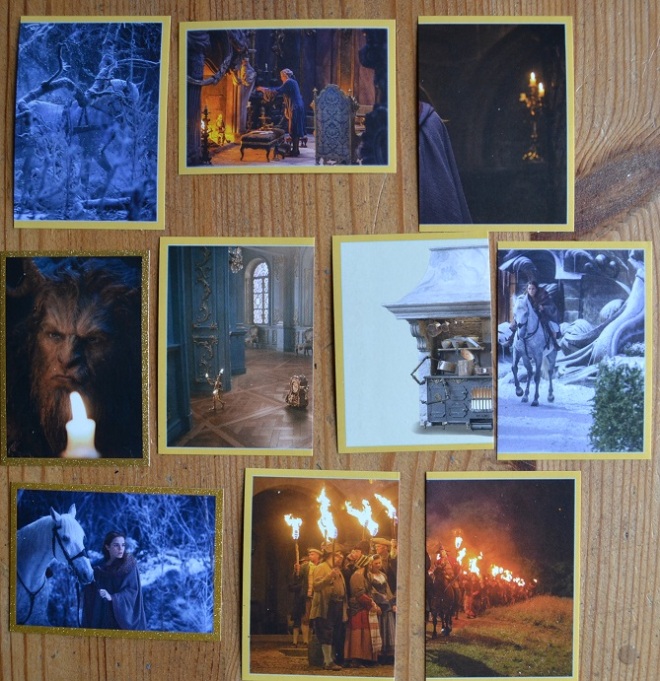 #31: The right side of a 2 part image: A white horse, Phillipe, hidden behind some frozen wintertime tree branches as he travels through the forest. Some of the foreground is out of focus.

#33: Whole landscape image: Maurice warms himself before the castle’s fireplace. A small foot stool launches itself at his foot unnoticed.

#49: The right side of a 2 part image: The cloaked shoulder of Belle and out of focus a candelabra in the background. 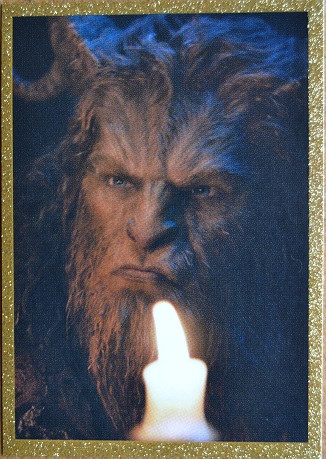 #69: The left side of a two part image: Lumiere and Cogsworth walk across a well lit hallway about to enter another room.

#80: The left side of a two part image: A cooking range. You can see knives floating in the air cutting vegetables and pipe like arms on one side holding a pan up.

#98: The right side of a two part image: Belle rides on Phillipe away from the snow covered castle. In the foreground is some out of focus shrubbery.

#104: Special glitter bordered sticker: Belle looking shocked/concerned while looking to the right as she holds Phillipe by the bridle.

#163: The left side of a two part image: A crowd of townsfolk hold lit torches.

#167: The right side of a two part image: The towns folk walk in procession, some on horseback, along a country lane (towards the castle).

If you have ever read my other reviews of merchandise stickers you know I tend to only buy one pack and end up saying ‘I got a lot of stickers that are only part of an image but you may have better luck than me if you buy a pack’. To counter this I bought two packs this time and… apparently multi-part imagery is the norm not the exception nowadays. Perhaps if I bought even more packs there are stickers which are complete images and I just have bad luck but it seems unlikely.

The stickers are decent quality and the images look nice in person despite how my camera has picked up on the underlying colour printing mesh and my noting how parts are out of focus as these have all clearly been transferred from stills of the film. The ones with a glittery border are nice stand alone images but very few of the others really stand on their own. In particular #49 particularly I feel could have just had the left side of that image as nothing is added to the image here save to add another sticker to the collection’s count needlessly. In fact that is what I am finding a lot with recent sticker collections – if you’re lucky you get the ‘good’ side of the image while the other side is pretty pointless save to add a sliver of a cloak or something else which is unnecessary.

For £0.50 it works out as £0.10 per sticker and I cannot recommend purchasing them at that price even as a treat for your children. They cut cost, as is common nowadays, by making all the packs multi-lingual but still seem to feel £0.50 is an acceptable price point for only 5 stickers per pack.

I assume there are other sticker products available for the film which show exactly what you are getting so if you really need to get stickers of the film look elsewhere as this range is far too hit and miss.

Russian and Welsh poetry. Updated every Sunday. Also reviews of literature, films, theatre, food and drink, etc. Any support or engagement is appreciated. View all posts by MrHearne