Over 210 Cards to Collect – 8 cards per pack including one Star Wars: The Last Jedi Foil Card.

Look out for special cards in packets:

11: Supreme Leader Snoke – a photo still from The Force Awakens during his hologram meeting with Kylo Ren and General Hux. It’s dark and blurry and at this scale just doesn’t work.

31: Rey – Promotional materials stock image portrait. Generic. You like Rey? You’ll love this. But it’s as generic a trading card as you can get.

95: A still from the teaser trailer of one of the new ships (I tried to look up the name but gave up – you probably know what it is if you’re reading this) just before it starts dragging through the surface revealing clouds of red dust. If you hadn’t seen the trailer this is a bad card with no meaning. Even having seen the trailer I find it amongst the weakest.

100: Millennium Falcon: A generic stock photo but on the back of the card it gives some of the ship’s statistics which makes this quite a nice card.

108: Qui-Gon Jinn vs. Darth Maul: A still from Episode 1 during their duel. In hindsight were there any ‘original trilogy’ cards in this series? Card 100 doesn’t count since it’s in the, as of writing this, new trilogy. This is a bit blurry too due to being a still from an action scene.

127: Luke Skywalker – painted portrait (I wish the artist had been named out of respect though of course Disney/Lucasfilm own the image). This, by far, is my favourite as it seems something not just copy-pasted from stock promotional materials or motion blurred film stills.

187: Stormtrooper Executioner – portrait from a stock photo. (It’s has that effect usually referred to as ‘holographic’ so I’m guessing it’s one of the limited edition cards). On a side note there sure have been a lot of variants of Stormtroopers since Disney took over. Got to push that merchandise guys! You could probably replicate it using a black permanent marker on a standard stormtrooper figure…

209: Agen Kolar – Jedi foil card – portrait from a stock photo. Who is he? I had to go look him up too as he is really minor and only found in the background of scenes with little to no development…

I might have been lucky with the ones I got but I’m quite pleased with these in contrast to other collections. The portrait cards are all very nice and high quality with the painting of ‘The Last Jedi’ Luke being probably my favourite. However on the downside, as has been the case before, the still taken from the film all have motion blur to them and thus look low quality in comparison to the other cards. The card stock used is of very good quality and I couldn’t see much risk of disappointment unless you have a distinct aversion to the prequel trilogy and let’s be honest how many people actually know Agen Kolar let alone what scenes he was in? Short answer: Palpatine killed Agen just before his duel with Mace Windu.

There you go. Now you know who he was… unlike some of the other secondary Jedi I don’t think he ever appeared in The Clone Wars TV series to be a more developed character like Kit Fisto or Plo Koon amongst others.

On the whole I wish they were a bit cheaper, but then doesn’t everyone, but I see no real issues with the overall quality nor number of cards you get (in comparison to other series recently) and they serve as a nice little treat for Star Wars fans young and old. I can’t say how easy this would be a collection to complete but since much of it is stock imagery I don’t think you will miss out on anything should you never pick a packet up. It’s purely a ‘teaser’ promotional item and even at the time of posting this a few weeks after purchasing them Tesco have already stopped stocking them. The low points are the photo stills with motion blur (that very dark and blurry Snoke one especially!) but all the character specific ones really do harken back to the golden era of trading cards and more than make up for them. If you’re a fan of the series, and can find them, take a chance and buy a pack. If you’re looking for value for money it’s probably better to invest in something else.

I kept notes on my phone and never typed them up only to find out I cannot transfer them via Bluetooth, email, messaging or text. What to do? They are all full note documents which are about 1500 characters each and I have generated on average 4 per day for the past 5 months! I tried typing them out but that involves having to constantly tap the screen so it doesn’t shutdown. If it does then the entire Notes programme reverts to its default, sending me to the top of the list, to the newest entries, and I have to spend 30 seconds scrolling all the way down again and finding where I left off. So what to do?

Use a DSLR camera and photo, then scroll down while keeping the last line on the screen, photo, then scroll again, then photo, ad nauseam. The first set of images numbering somewhere in the region of 500 shots added up to about 1.5GB of data. Obviously once I type them up this will be far less but for the time being it is a step in the right direction.

With them off my phone hopefully it will not drain the battery as quickly… no that’s not the reason for this spring cleaning. I have a bad habit of making notes but not writing them up. I have scraps of paper from the last three years which have probably lost all meaning by now.

If I clear my phone will it clear my mind? No. But it will ensure I do not look at them during the day. Not discarded but at least placed where they will not weigh me down. A catharsis through clearing my record keeping.

Tomorrow I will photo all the scraps of paper – Held in a see through A4 carry case along with pieces of high quality 300gsm paper sheets and notebooks of previous years (including one from 2012 whose contents I wrote up in an early blog post on here should you wish to look https://ramblingatthebridgehead.wordpress.com/2015/01/15/the-faux-wisdom-and-miscellany-of-a-partially-filled-2012-notebook/ ) on a chair which has for the past year served more as a storage zone than a seat.

Monday I will sort out my paperwork – Presently spilling out of a filing box as if a small non-flammable bomb had exploded at its base.

Tuesday I will sort out the table in the corner of the room where I have put numerous brochures, programmes, pamphlets and leaflets from every event I have been to in the past ten years and many I never ended up attending in the end – A wicker basket, won from a Harrods contest, holds them all in check. If you have ever seen the artistry some people have in maximizing their one allotted bowl of salad at a restaurant buffet constructing fom that simple base a cyclopean tower ike structure defying all logic and yet in no risk of structural failure then you know how I have ended up creating a massively overloaded, blossoming flower like, paperwork mass billowing out from the corner table where it has been growing for over a decade undisturbed yet nurtured. 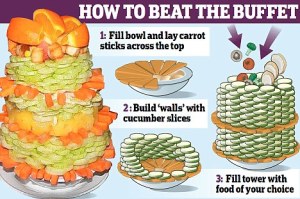 All these image copies will of course take up a lot of space if I don’t go and crop them but ultimately it will save physical space in the house. Although it goes without saying I will further back these records up by copying them to an external hard drive. So in one way I am getting rid of them but in another they will loom there awaiting the day I return to them and find they were all a waste of time.

But what are these notes about? Ideas, turns of phrase, thoughts, story ideas, observations, trying to better guide my future self about certain people’s most common type of behaviour so I don’t keep finding myself always giving them the benefit of the doubt or condemning them along with other miscellaneous matters. Does it really matter what they are about? They mean nothing to anyone except me (unless the person looking is naturally inquisitive or nosey). When there are entire sites like Pintrest focused solely on ‘pinning’ things as if to make a note of them for future reference it seems nothing odd to be ‘old school’ and actually have such things in the real world.

It is a long task but in the end I hope it provides catharsis. Better this than burning all my worldly belongings no matter how alleviating and romanticized that idea may be to people who are at no risk of it happening to them. I hope it will be a cathartic experience. I am not sure if I am an enigma or an open book.