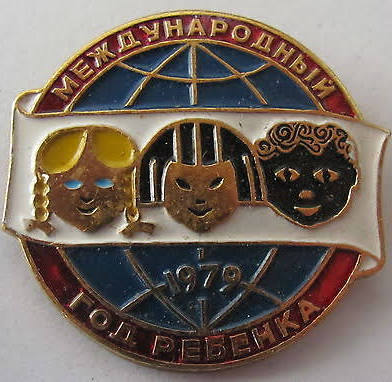 Children’s Day is recognized on various days in many places around the world, to honour children globally. It was first proclaimed by the World Conference for the Well-being of Children in 1925 and then established universally in 1954 to protect an “appropriate” day. 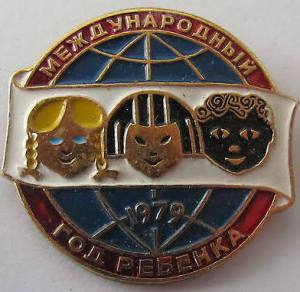 Here is a Russian pin badge celebrating UNESCO’s declaration that 1979 would be the International Year of the Child.

The Cyrillic translates as follows:

UNESCO proclaimed 1979 as the International Year of the Child. The proclamation was signed on January 1, 1979 by United Nations Secretary General Kurt Waldheim. A follow-up to the 1959 Declaration of the Rights of the Child, the proclamation was intended to draw attention to problems that affected children throughout the world, including malnutrition and lack of access to education. Many of these efforts resulted in the Convention on the Rights of the Child in 1989.

Numerous events took place within the UN and in member countries to mark the event, including the Music for the UNICEF Concert, held at the UN General Assembly on January 9. WBZ-TV 4 in Boston, Massachusetts, along with the four other Group W stations, hosted and broadcast a celebratory festival, ‘Kidsfair’, usually held around Labour Day ever since, from Boston Common. Canadian animator/director Eugene Fedorenko created a film for the National Film Board of Canada, called “Every Child“, which centred on a nameless baby who nobody wants because they’re too busy with their own concerns. This was used to explain the importance of how every child is entitled to a home. Sound effects were created with the voices of Les Mimes Electriques.

…The pin badge, to a modern eye, does look more than a little bit racist doesn’t it?