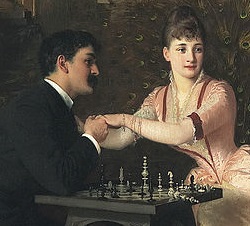 Предложение (a.k.a ‘A Marriage Proposal‘ or ‘The Proposal‘) is a one act farce by Антон Павлович Чехов (Anton Pavlovich Chekhov), written somewhere between 1888 to 1889 and first performed in 1890. It is a fast paced play of dialogue based action and situational humour. Usually it is performed in combination with other short pieces of Chekhov‘s such as Медведь: Шутка в одном действии (‘The Bear: A Joke in One Act’ or ‘The Boor’).

I was reminded of this piece by the marriage proposal story line featured in ITV’s Dr Thorne mini series which concluded last night. A turn of fortune changes the mind of the future groom’s mother regarding the marital appropriateness of Dr Thorne‘s niece and so there is a marriage and the mother in law is teased for her preoccupation with the families fortunes wishing for her son to marry for money and not love. This theme was prevalent during the nineteenth century with the most widely recognised examples being in the novels ‘Pride and Prejudice’ (1813) and ‘Wuthering Heights’ (1847 – albeit in the latter part of the novel which is often omitted in adaptions).

Ivan Vassiliyitch Lomov, a long time neighbor of Stepan Stepanovitch Chubukov, has come to propose marriage to Chubukov’s 25-year-old daughter, Natalia. Stephan gives his permission and Natalia is invited into the room, while Stephan steps out, so Ivan may make his proposal to Natalia.

However instead they get into a disagreement about the ownership of the Oxen Meadows adjoining their properties which Ivan intended to gift her as a dowry. The passionate disagreement results in Ivan, a foppish hypochondriac, suffering supposed palpitations and a numbness in his leg. Stepan, rejoining them, notices this and he himself argues about the sort of bad people the Lomov family have been in the past and has Ivan leave his house. While Stepan rants about Lomov, he expresses his shock that “this fool dares to make you [Natalia] a proposal of marriage!” She immediately starts into hysterics, begging for her father to bring him back which he does immediately.

Natalia and Ivan get into a second argument, this time about the superiority of their respective hunting dogs, respectively Squeezer (who is unfit to be a hunting dog) and Guess (who is old and lame). Stepan gets involved and is close to losing his temper and makes this clear to Ivan. At this junction yet again, after accusing Stepan of being an intriguer amongst other things, foppish Ivan gets a case of vapors and collapses from his exhaustion over arguing . Thus Stepan and Natalia, after checking him, fear he is deceased. Stepan also begins to over react at the junction and Natalia cries over the sudden death brought on by the argument.

However, after a few minutes Ivan regains consciousness, and Stepan, insisting they leave him alone afterwards,  all but forces Ivan and his daughter Natalia to accept the marriage proposal with a kiss. Immediately following Ivan’s kiss on Natasha’s hand, the couple restarts their argument over the dogs and Stepan resigned tries to change the subject by calling for champagne to celebrate while decrying this is how they start their union.

This is a light hearted skit mocking the over sentimentalisation of marriage proposals alongside the etiquette and behaviour of the the middle classes.

At the start the participates formally address each other using the personal Christian/first name and the patronymic name (based on the name of the individual’s father) indicates how this is a serious proposal but quickly this falls into farce as the arguments arise between the individuals. The equivalent of Mr, Miss, Ms or Mrs were very uncommon and even today tend to be used more often regarding foreigners although it should also be noted the use of the patronymic today is reserved usually for formal occasions while it was more common in use during the past. Later in the piece all sense of etiquette is thrown out as the squabbling takes its place and even after order is restored the personal behaviour of the couple erupts once more over a trivial matter.

You may note how the men in the play are mirrored by the dogs. Ivan is Squeezer who is ‘overstrung’ and Stepan is Guesser who is ‘old and lame’. Natalia speaks dotingly of her dog Squeezer and perhaps this gives an indication of how her marriage will continue in which she will both argue and yet dot on her husband in the future (and it can easily be seen this is how it will go as such a pairing was very commonly portrayed in dramas of the time regarding married couples and you can see reflected in what would become a cliche in televised sitcoms from America focused on a central married couple even today).

If you saw an adaption without Chekhov‘s name attached and with a localised setting would you realise that this is the work a playwright from over a century ago? I doubt it. These character’s archetypes are universal and timeless. If you changed the names to a more local variant you can see them time and time again reflected in later works worldwide. A central male character, usually middle age or reaching it, who over reacts to events around him in situations he has no control over. A woman who is concerned regarding social matters and very argumentative with cutting comments directed towards her partner (which it is fair to comment is a sexist stereotype nowadays). An old man or woman, usually the parent of one of the more prominent characters, passing comment on events and mentioning the past both positively and negatively. These dramatic caricatures repeat as theirs is a simplistic truth pinpointing the faults of society and its nature to confuse the trivial with the sincere within the grander intentions of the people involved.

This is a simple piece and highly entertaining. As I noted earlier it is often performed accompanied by other short pieces by Chekhov and they offer views of society which still hold as true a view of society today as they did during their writing over a century ago. I would highly recommend seeing live performances as there is an energy there which is hard to replicate through recorded versions. I provide the audio book above, which is a fair simple audio performance, so you can experience the dialogue but nothing beats a live performance.

I often want to see adaptions of Chekhov’s works and they are apparently often repeated in repertoires but somehow never seem to be performed near me. I attended the performance of ‘August’, Anthony Hopkins‘ adaption of ‘Uncle Vanya’, when it was premiered at the New Theatre, Cardiff but since then it seems a far rarer thing in South Wales to see the works of Chekhov despite my every care and attention regarding the yearly repertoires in the performing arts of Wales.

People seem intimidated by the works of Russian writers – after all how often do we hear Tolstoy‘s Война и мир (War and Peace) being used as a synonym for ‘immensely long and difficult to read book’? This is due to Tolstoy‘s personal predilection of going into prolonged commentaries about society which pad the book up quite a bit and do not reflect Russian literature at all. The works of Dostoevsky are influenced by Dickens and read just as easily with a focus more on narrative than reflection. The works of Chekhov are expedient, in comparison to previous generations indulgences in the poetics of language, in how concise the dialogue is. The only limit seems, according to a Russian friend,  to be how the Russian productions of these works usually over sentimentalise them, which effects foreign productions perceptions of how to adapt them, when they can be produced in a far more relevant way to today’s audiences.

Yet with this said the BBC‘s recent near cinematic production of ‘War and Peace’ proves even Tolstoy can be translated in an easily understood adaption. Albeit, as is inevitable with many adaptions of literature, some of the aspects are lost for immediacy or because hearing the inner thoughts of a character is a difficult concept to translate without giving them long running monologues or a voice over which takes you out of the scene.

There is a stigma sadly but, once you have dipped your toe into the water and realise how absurd the prejudice is, there is a world of universally recognisable character archetypes in  Russian works.
‘August’ was also made into a film.
For whatever reason WordPress is refusing to let me space the review part out properly so I used the ‘horizontal line’ tool to break it up and make it a little bit more easy and pleasing to read layout wise.