I have banished God

further than the Antipodes

since my so-called accident.

He was the owner

of those mills of death,

his manager the old Cholera.

The preaching of Cheapjack remedies:

holding up heaven as a cure.

They took my eyes

My mask and its perpetual night

is known to the pit-ponies.

I hear the river’s voice

bring tune to my ballads,

as I breathe the welcome wind

from the west and eventual sea.

Night arrives and they all

rousing rebels and laughing ones

who sup to conquer daytime.

My daughter is the blackbird

giving flames to the begging hearth

of our basement with her song;

and I am the owl, I turn

to face their sufferings,

call them out to chase away

I magic to mice

Fun fact: Richard Williams, better known as Dic Dywyll (Blind Dick) but also sometimes as Bardd Gwagedd (The Bard of Folly) was a renowned ballader in nineteenth century Merthyr, who was blinded working at the Crawshay ironworks. His daughter, Myfanwy, was immortalised in Joseph Parry‘s song.

This link gives you a little bit more information about Dic Dywyll if you’re interested: http://yba.llgc.org.uk/en/s-WILL-RID-1790.html

trills of a nightingale,

the silver and the shiver

of a sleepy rill.

all the magic transformations

of eyes and lips and brows.

In smoky clouds, a rose’s purple,

the shine of amber beads,

and the kisses, and the tears,

and the dawn, the dawn!

To live in the moment’s a well-worn routine

that most of the world has perfected;

for some, it’s the moment that’s already been,

for others, the one that’s expected.

Yet no sort of magic can kindle anew

a past that is over forever,

nor summon the future before it is due:

our moment is now – or it’s never.

So brief is the moment in which we may live,

and future or past it isn’t.

Whoever would know of what life hast to give

must gratefully welcome the present.

Consider the small fruit tree after the rain:

the enchanted magnificence of its branches

glitters in the sunlight.

Yet when the sun hides, in a moment

It is again, as it was before, 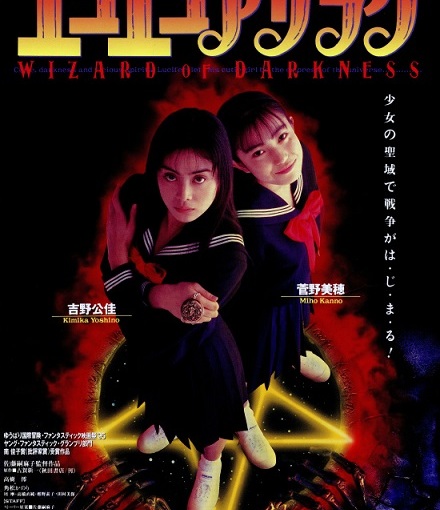 Occult girl Misa Kuroi goes to a new high school to prevent the summoning of the devil by a mysterious cult. She makes no effort to hide she is a witch. Everyone in the school loves the occult thus she becomes very popular despite the fact her only line in the entire film could be ‘I am a witch’ in the manner of Groot from Guardians of the Galaxy and nothing of her characterisation would be lost…

She is what would be later considered a Mary Sue. Really she has no personality but as usual this is explained as her being ‘tacit’ or ‘stoic’ or some other excuse for ‘blank slate of acharacter the audience can project themselves onto. She is just used as a familiar ‘attractive’ face to connect a series of individual stories that wouldn’t be able to stand on their own in the minds of those the writer answers to.
Really the truth is they’ve just hired someone for her looks who cannot act a.k.a. Kamika Yoshino a gravure idol (i.e. lots of videos and photoshoots of her posing in her bra and knickers). The logic the aundience must accept: She is pretty therefore she is the good guy. End of discussion… Always… In every film, book or story that has mass appeal because that what the punters want.
In the manga apparently she has a cloak, sword and a funky looking pentagram belt. Sadly that’s a bit too exciting for this film and would have driven the budget up by another 1000 yen (£6.40/$8.91) almost doubling the budget! 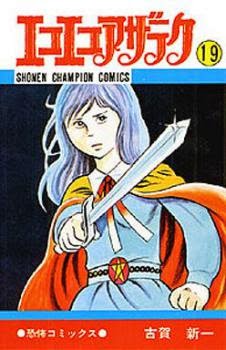 All the students in this school, who already know way too much about the occult, have figured out the mystery before Misa’s arrival! The series of recent murders (the last of which opens this film in a lazy rehash of the priest’s death from ‘The Omen’) are all at georgraphical sites which, when connected, form a giant pentagram meant to summon the devil and that their high school is the nexus!

With these sort of deduction skills maybe we don’t need the Scooby gang, let alone ‘Occult Girl Misa: Magical Soldier of Indifference’, to come to the rescue…

The skinny boy/tool of the devil is apparently handsome, in that androgynous way the Japanese have loved ever since the Heian era, and due to this seems excused for being overly aggressive and shouting at the female characters constantly. This is something I often see in films – as long as a guy is handsome it is acceptable for him to treat women like dirt and not be judged for it. Although he is not the protagonist I often see this behaviour in Japanese films set in high schools.

The girls in this film seem to just let themselves be killed under the pretence of ‘oh but he’s so handsome and I have a crush on him. He would never do something like this!’ Cue the girl tripping over her own feet and being stabbed or bludgeoned to death. In fairness he was possessed but nonetheless you would think common sense, even in horror films, would suggest they run away from him. They, of course, don’t run nor do they fight back to defend themselves and thus all are posthumously given Darwin awards.

The lesbian teacher and the student she is grooming are pointless side characters used for fan service. They serve as examples of social deviants and, yes, both die. However not before the teacher is revealed as a cult member (shocking don’t you agree! Adults in teen focused dramas are not trustworthy!) and the groomed student is sacrificed to the devil.

My favourite moment of theirs is when the class are doing a test and the teacher takes the student outside for some frisky time. I watched this thinking ‘everyone would notice that and in reality would have been gossiping about the pair long before they became this blatant about it’. When will the girl do the test? Perhaps hitting sensei’s G-spot gets you an A grade?

Kuroi’s new best friend (Miho Kanno) walks up to her saying ‘wow you’re so cool’ at the start and hangs around her most of the film to basically tell anyone unfamiliar with the manga (i.e. basically all foreigners but also people with a life in Japan) that this is the heroine of the story and she is so fantastic and so stoic that it makes everyone fall in love with her instantly for being so undeniably cool. This goes on for most of the film with her playing the sidekick role overreacting to everything.

Guess what? She is the big bad villain of the piece. This wasn’t a surprise really as, by this point in the film, everyone else in the school was dead. What I found hilarious during the film is that all the cult members, when hooded, have deep baritone masculine voiceovers but as soon as the hoods are lowered it’s young women with those high pitch voices that Japanese apparently find ‘cute’. I guess the male voices were to hide the revelation that the cult was comprised of women? Hilarious nonetheless in how inane it was when revealed.

So we reach the denouement. The possessed boy is dead – how I can’t remember but considering how the murders were done via ‘no handsome-kun you’re too handsome to be evil! Then the victim girl falls over squealing before being killed by him (also squealing in her death throws) and he then wanders off, covered in blood, to find the next girl to kill’ I really couldn’t care less how he came to his end.

Teenage cult leader-chan has revealed herself and has finalised the ceremony to summon the devil. Misa can do nothing to stop it and is unceremoniously turned to ash. Yes the hero who didn’t very little just got killed. But this is based on a Japanese shonen manga so there will be some insane way she comes back.

Cult-chan summons the devil. The CGI, for the time, is admittedly really impressive as the devil looms over the school… and then Cult-chan face gets her face ripped off immediately and her innards fly up into the sky. Why? She couldn’t contain the power? The devil decided ‘nope don’t like look of your face’ and ‘tore up’ the contract via her flesh? Who knows… who cares? The devil disappears unceremoniously bringing and end to proceedings.

Disaster is avoided without the protagonist actively doing anything. If she hadn’t turned up it would have ended up exactly the same way. Misa gets resurrected by some hair she kept in the locket she wears. It was been featured earlier in the film but considering what a deus ex-machina it was I omitted mentioning it before so you could get a sense of how out of leftfield this comes.

Misa melodramatically cries over the loss of her new best friend/devil summoning Cult-chan who was the only person who could understand her. Music plays and the next thing we see is Misa walking off to the next school to solve the next occult incident at a new school…

Misa your so cool in that ‘I just happened to be there and survive despite everything going on’ way. Men want her, women want to be her…

Review: 90s Japanese film fodder starring a Gravure Idol. It’s hilarious in how bad it is. Give it a watch just to see how low budget it is. The effects for the devil were admittedly the stand out bit where most of the budget must have gone.

Did I watch this without subtitles? Damn right! Did I miss any subtleties? Well probably the cookie cutter character archetypes and some details that would be forgotten ten minutes later but this is as generic as it gets so no, no, I didn’t. If anything it improved the experience – especially when I made it move at double the speed.

I had known of this film’s existance for two decades and never got around to watching it. It was amusing but low budget, as many Japanese films tend to be as they are more of a ‘television series’ watching kind of nation. Go in expecting little of the film and you will enjoy. Go in expecting something with the budget of an American film and you will be sorely disappointed. Just remember this was based on an old manga which inevitably was popular during the 1970s occult fad Japan had during that decade and everything will be okay.

Oh and some fun news if you want more of Misa’s adventures but updated: There was a recent TV series and at least a few of the early episodes are available on YouTube if you decide to look them up.

Not what you were expecting? Well it was hopefully fun to read this more irreverent kind of review…