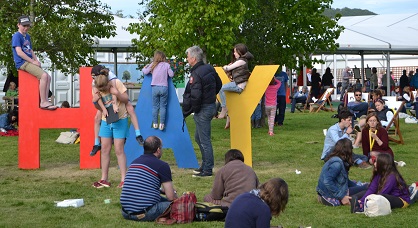 I love the town of Hay-on-Wye where they have a large number of bookshops containing books on every subject you could imagine and often many you hadn’t even realised existed. Every visit to a shop is a new learning experience and in the tranquil setting you will find respite from the all too busy world. Every year I go to the Hay-On-Wye Literature Festival. I may not from now on. The world has found this oasis and seeks to drink it dry of its charm in the passage of a week.

I used to be a much smaller event with talks by a few people but always you were drawn to going into the town filled with its labyrinthine shops filled from floor to ceiling with eclectic collections of books ranging on any and every subject you could imagine if only you were willing to take the time to look through the stacks thoroughly. But my experience this year has cast a shadow over this place. To a bibliophile this town would sound like some unknowable heaven on earth but… celebrity and faux, waxing lyrical, philosophical rhetoric are the order of the day. 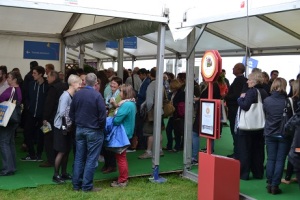 Such immense crowds. Crowds the level of which, if we were talking of battery farmed live stock, would be unacceptable. I disdain it. Stephen Fry walked past me with an assistant guiding him like a sheep dog. I remember five years ago when he pranced around like a majestic stag free of restrained but not anymore. People gawp and coo. He and Jude Law, along with a few others, were reading letters of emotion and wit. This is a recurring event now apparently though it always feels like a easy to do schedule filler rather than something to be made prominent at the event. Sandi Toksvig walks quickly onto the stage to read her assigned letters but doesn’t remain for the applause afterwards as the others did. Far too busy now. This year I note they recieve roses made of paper when they were given long stem white roses in previous years. I see one of these tokens left discraded on the floor of the event bookshop later on. A sign of the times. The pace of the entire festival used to be leisurely and flowing but now it is all timed and erratic. No longer are you absorbing the occassion but rushing to the next fix of stimulation. This letter reading started fifteen minutes late, not accounting the time to get people into their seats, and so many people had to leave early to get to their next event on time. There is no real apology made except to acknowledge they will have a slight reordering of the readings.

Too many people. The book shops seem to be charging more now. The main event book shop charges far too much yet you can hardly approach the shelves to see the books of the Event’s writers selling their wares.

I go to listen to a BBC Radio Wales programme being aired live. As I enter a steward repeatedly stabs at my shoulder with her talon like a bird of prey stripping flesh from bone. I turn around and she excuses herself. Did she think I was someone she knew? Was I trespassing following the other four people who were with me? I will never know. People don’t explain themselves when the authority of a neon yellow reflective tabard gives them the illusion of authority. I sit in the audience and Violet Skies sings a few songs in front of us. Later the presenter and his hench-persons declare there is going to be food next and won’t that be nice for us the audience? A single plate tours around the front row of the audience, who are people clearly associated with the BBC radio staff, but no one else gets a sniff of the veal sticks they are eating. It goes without saying that watching them eat was a highlight. (Violet Skies actually was and deserves support).

I saw some interesting books. Do you remember the books in school that were hardback B5 sized copies used year after year to teach set texts, usually something by William Shakespeare? Well there was one of modernism and the occult…. oh how I wanted it but the ticket price was £55! I thought it was a mistake and checked the other copies, but no, that really was its price for a measly 175 or so pages. I should add this was a newly published book in the main event bookshop yet somehow was £55. It made no sense. Also, at the exit, there was a stall manned by two Americans. They were trying to sell subscriptions to the international edition of the New York Times. The girl was the definition of a pixie hair cut with buzz cut side panels, thick black framed glasses, hipster stereotype and the guy a mass market John Hamm with casual wear perma-stubble ken doll. I saw a woman in the event bookshop buying lots of those ‘a simple guide to…’ type books en-masse. She wanted a working knowledge to discuss the topic but not enough to actually have any real knowledge of it. Posers everywhere. Rhetoric will be the stain of this age of humanity…. just as Socrates and Plato feared all that time ago in ancient Greece. Why know about a topic when you can just act as though you do. All the respect without the blood, sweat and tears of academic endeavour whether formal or informal. If given the test by Socrates of whether they desired knowledge as much as air many people here would fail.

So I didn’t enjoy. Apart from the ‘reading of letters’ event there was a talk about the Ukraine crisis with Russian journalists. It was sold out. I wonder how many attending actually had a long-term interest in the region, how many were just attending as it is a current event and how many just wanted sound bites to use of a dinner party should the topic ever arise. Faux-intelligentsia: a coffee in one hand, iPhone in their blazer pocket and a hemp bag in the other filled with the event freebies.


I finally made it to the town and heard an upbeat instrumental of Katyusha playing in a tent… I walked over and they got to the chorus and LA LA LA LA LAL AL ALALALALLALALALALLAA. They didn’t know the lyrics? Why LALALALALLALALALALALALLA? What was for a moment a glimpse of hope was dashed. On tables outside the tent people sell overpriced random rusty tat in hopes the hipsters will think it artistic and retro-chic. I remember a previous year when a drunk German sat in the nearby pub and espoused how we, here, are a stupid, inferior, mongrel race made up of the entrails of every invader’s unwanted spoils of war left behind to rot. The pub in question we went to for a drink. The barmaid said it was cheaper to buy the bottle than two glasses of wine so this advice was accepted. A round of drinks consisting of two cokes and the bottle turned out to be £19.50. For those who do not live in Britain the average round of these drinks would be about £7.50 up to £15 depending on the venue. Was this a one-off ‘event premium’ pricng stategy? I do not know but we go to the beer garden and already these sweet drinks are bitter to the taste buds. Somehow I look back and am less offended by that bigoted German than what I have seen today. 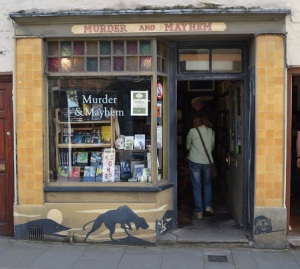 One shop had an interesting, eclectic, interior. All the bookshops contain novelty but this one actually had chairs to sit in as you read. It is my favourite shop and I always buy from it… except on this visit as I was so demoralised by my experiences of the festival site. It stands across the road from the pulp fiction, crime and murder mystery specialist ‘Murder and Mayhem’ bookshop (with chalk outline drawn on the road outside it). Books pouring out of every crevice and on all topics. Books which you did not know existed and yet entrance you immediately. The prices here were fair unlike elsewhere. I do not give its name because you should discover this town for yourself and enjoy the experience of discovering its hidden wonders firsthand. 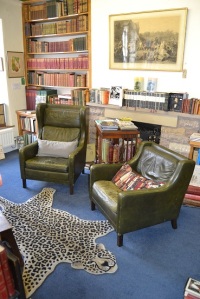 However, to avoid you thinking I was going to end on a positive note, let me warn you of one shop not to purchase from. Booths, the self-declared ‘biggest second-hand bookshop in the world’, will overcharge and belittle you for daring to ask for anything not immediately apparent. The claim is of course a lie, a little boast allowed under law, to entertain the notion of encouraging your custom. This year it was closed at 5pm….. The arrogance of a second hand bookshop to do such a thing on a festival day as if to suggest they do not need customers and you should be grateful they allow you to enter. I hate that place. Once I had seen a book there and remembered the cover so asked the shop assistant to look up ‘Isobel’ a novel about a Scottish witch and let me see the google image results. Repeatedly he kept asking for the author’s name. Of course I did not know this otherwise I could have easily found it on the racks in the basement hence why I now was asking for his assistance. No he insisted he needed the name. He looks on Wikipedia for a moment but to no avail. We are still stood looking at the screen. I again ask him to look on google images. He relents after 10 minutes and the third image on the search? The cover of the book I was looking for with the author’s name! So he finally uses this name on the database and tells me they do not have it but can order it from them (for a premium). I decline and make my escape. They overcharge here for things that are not even rare. Architecturally the interior is stylish yet modern and the café is nice but I do not support this shop since this experiment in getting blood from a stone. 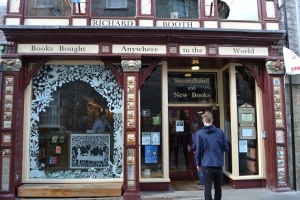 During the festival the town is filled with hipsters. Hipsters of all ages, shapes and sizes. I felt dirty. This was not the celebration of literature, wit and knowledge but a cold exercise in placating the sycophantic, self-congratulating middle class ego with a sizeable disposable income.

The rest of the year this town is an oasis for the literate bibliophile seeking adventure and willing to spend an entire day trawling shelf upon shelf of unexpected books on topics that you would think too niche to be contemplated for publishing.

The festival is just there for star chasers, the bourgeois and people who need to be doing something to justify their elitist attitude the rest of the year. I doubt any of the books bought by the event speakers get read and just gather dust on the shelves waiting for the time they will grace the shelves, en-masse , of one of the numerous bookshops here at a far reduced price. I like this town but it is like a beach side town during the summer holidays during this festival.

Other people poison your life. Yet humans are a social creature. But we build large caves in which to hoard our belongings. The selfish gene has gone grown stronger with the passing of generations and soon it will be a cancer leading to our downfall as a species if we cannot overcome it.