And it seemed to me that there were fires

Flying till dawn without number,

And I never found out things – those

Strange eyes of his – that colour?

Everything trembling and singing and

Were you my enemy or my friend,

Winter was it or summer?

from Седьмая книга (The Seventh Book) 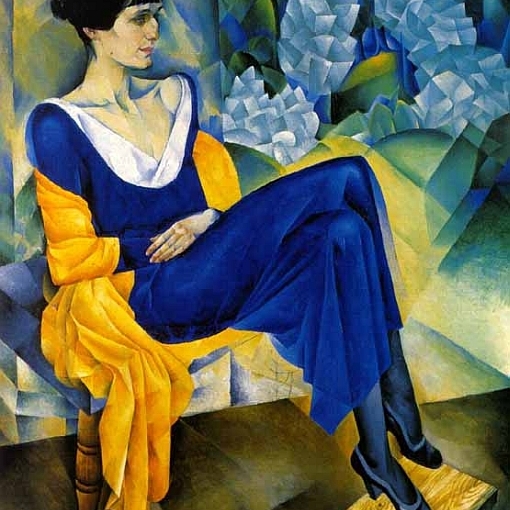 I would gaze anxiously, as if into a mirror,

at the grey canvas, and with every week

my likeness to my new depiction grew

This extract is about a well known potrait of Akhmatova by Nathan Altman (1914) presented above for ease of reference. Nathan Isaevich Altman was a Jewish-Russian, Soviet, avant-garde artist, Cubist painter, stage designer and book illustrator.

In my town strange things happen… Let me begin not by telling you where the grotesques featured at the top of my blog come from. They are from the oldest church of the town, with the midnight cross, that overlooks the town and are for another time to discuss.
Let me first tell you of the clergy who frequent one of the churches on the edge of the town centre so you may better understand the people whom frequent this place at the end of the bridge.

Once it was a small cattle market town prone to flooding, as all low lying land is, and nothing more than a pleasant wayside stop gap for those journeying between the whitewashed capital and the major Western port city where a poet once lived and is forever immortalised for his debauchery more so than his words. This town, my home town, is no longer such a place and many have doubted it ever was except in rose tinted memory. Now it is a sprawling cesspit of various architectural styles, built one on top of the other, with no unified design,: Georgian, modern, gothic, 1980s Avant-garde, red brick, black tar, sandstone and slate, concrete and cement like a mottled patchwork rag with equally disparate housing developments spreading like cancer into every crevice not yet rid of its greenery. No single parish council ever wished to concede to another, before or after, and so the town is a homunculus writhing in its own filth screaming to be put out of its misery. But it cannot anymore because too many have staked their claim and now find they are held within its grasp.

There is a church on the edge of town, the youngest of the three, with large iron gates and ivy covered trellis. A sandstone wall stops anyone looking in on the church’s grounds and slick black burglar-proof paint sits ever ready to stop people climbing over it. Behind this fortification two men, dressed in the dour cassocks of their faith, sit on three legged wooden stools in the courtyard under the dappled light of a tree. Neither is exceptionally young nor old but of an age that would suggest authority, knowledge and above all wisdom has been gained with the passage of time.
Brother Door-keeper, who speaks in husky tones, and Brother Gate-opener, whose voice is a lilting warble, while away their hours giggling between themselves furtively. One holds a heavy iron gate-padlock and the other the key with which to unlock it. Listening carefully at the wall you may hear this conversation repeated time and time again:

It is for this reason no one visits this church. They are silly people and perform this pantomime every single time the grounds must be opened be it Sabbath, a saint’s feast or any other Holy day. Celibacy truly is a heavy vow to have undertaken and they must find such little release in their duties through such innuendo…

But they are, I assure you, a friendly pair who would happily chat and help any who would seek it…unlike those missionary sisters whose church of the midnight cross overlooks the town. But that is a story for another day…

This was not the story I was going to write but in the end I decided to adapt an idea I had in an old notebook just to gauge if there is any validity in the idea. An unpolished piece by anyone’s estimations but the core humour of it is there and considering it consisted only of the concept of two celibate monks being sexually frustrated and acting out using a key and lock I think it went okay… Next time I may do a review of something just to keep mixing it up. Then I will hopefully write about those macabre missionaries mentoned above as they were in a short story, which got positive feedback, though I will have to adapt them for a blog vignette and may have to split it into about 3 seperate posts.

My intention with the ‘In My Homtown Strange Things Happen…’ series is to practise a bit of creative writing inspired by different bits of the town and surrounding area. With each fantastical story will be a short piece underneath about the real life locale.

There are actually three churchs in the vicinity of the towncentre, St Illtyd’s (which does overlook the town on top of a hill with a cross lit up, in the winter, on its bell tower), St Marys, and the recently constructed Catholic church.

The church in the story above is prehaps an overblown version of the Catholic one. The story in no way represents the actual church nor any of the people involved with it in any way. In truth the story came about independently of this place but I couldn’t think of a similar place to set the story and prehaps should have left it out of the series as an independant vignette as it came from a very brief story concept scribbled one day years ago and only typed up in one sitting just now. The two priests of the real place are quite young and I met them when attended a wedding once. Its a nice place but personally I have always preferred the older churchs and cathedral designs as they offer a sense of awe, as was the intent when built, and that you are in a special place. The modern design, in keeping with certain other very recently built locations around town, seems all too modern and I wonder how soon it will be that we will look back at it as modern generations do now the concrete tower blocks and awkward designs of the 1960s?

Feedback and comments are welcome.